What Is It About Viscosity?

Viscosity tells us how thick or thin a liquid is. Viscosity is the property of a fluid that causes it not to flow easily because of the resistance of its molecules. When we use coatings, we need to understand viscosity, because it is key to accurate application, and a finished coated product that achieves the target design.

The viscosity of Cork manufactured aqueous coatings is measured at 70 degrees F utilizing a Brookfield viscometer which yields an accurate, reproducible measurement in centipoise (cps). Other simpler, less expensive devices, called orifice viscometer cups, numbered according to hole size, are also used. Commonly used Zahn-type cups should only be used as a comparative tool to evaluate or adjust similar coatings, but should not be considered a viscometer.

So What is the Problem with Viscosity?

In measuring viscosity, you MUST measure viscosity at a stabilized 70 F. temperature to expect to come close to the viscosity specified by the coating manufacturer.

The field testing of coatings by Zahn type cup is very imprecise with results that are not reproducible under the best conditions. Not only are test results not reproducible when using the same exact cup, operator, and sample, but cup-to-cup variations exist from the same cup manufacturer and major differences are apparent among different cup manufacturers. However, the use of these cup devices is popular because they are cheap and seemingly easy to use. If there is to be any hope of obtaining a usable viscosity comparison by the use of viscosity cups, then certain prescribed recommended procedures MUST be followed!

The viscosity of inks and coatings should be tested as close to Newtonian as possible as non-Newtonian, thixotropic liquids will cause inaccuracy in a cup reading. Foam and volatiles that have been evaporated from a sample will also produce erroneous readings.

So, what is it about viscosity? What do you think?

You can see that viscosity is not too difficult to understand, but at the same time, it is not so easy to measure the same way twice. When all is said and done, most questions about viscosity are a matter of temperature, faulty test procedures, or cup differences. Follow test procedures exactly and test to compare samples only.

Questions about Viscosity and Coatings? Contact the Experts at Cork.

The UV and EB Curing Process Prior to discussing the testing of the cure of UV/EB curable coatings let’s review what UV/EB curing is. Curing 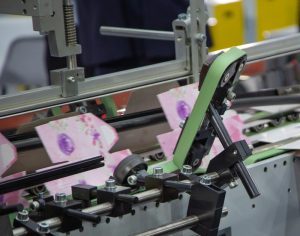 Two types of adhesives or glues are in common use to glue aqueous coated substrates.  These are cold white glues and hot melt adhesives. The

Blocking is a term given to describe sticking between two or more layers of coated substrate, which may be printed, or unprinted, and in roll,

Elmer W. Griese Jr, having accumulated 35+ years of knowledge working in the coatings and printing ink industries has now authored the Cork Tech Talk News, newsletter since 1992 producing 112 issues. He remains dedicated to educating and illuminating technological progress that offers the potential to advance coating technology and its applications.

Get Tech Talk Newsletter Delivered to your Inbox